Oriental rugs are handmade rugs that feature intricate patterns and designs and come in beautiful color combinations. They can be quite expensive because they have very high quality.

They are great for accentuating any room by adding color and texture, plus they add a certain look and feel of elegance.

These rugs vary in style, colors, and design, depending on the region or country where they came from.

Here is Where Oriental Rugs Specifically Come from:

The process of weaving rugs has been a part of the culture of Asia for more than 2,500 years now. Oriental rugs came from the Central and Eastern parts of Asia and have been developed between tribes, villages, and cities. The exact origin of the art of carpet weaving is unknown. 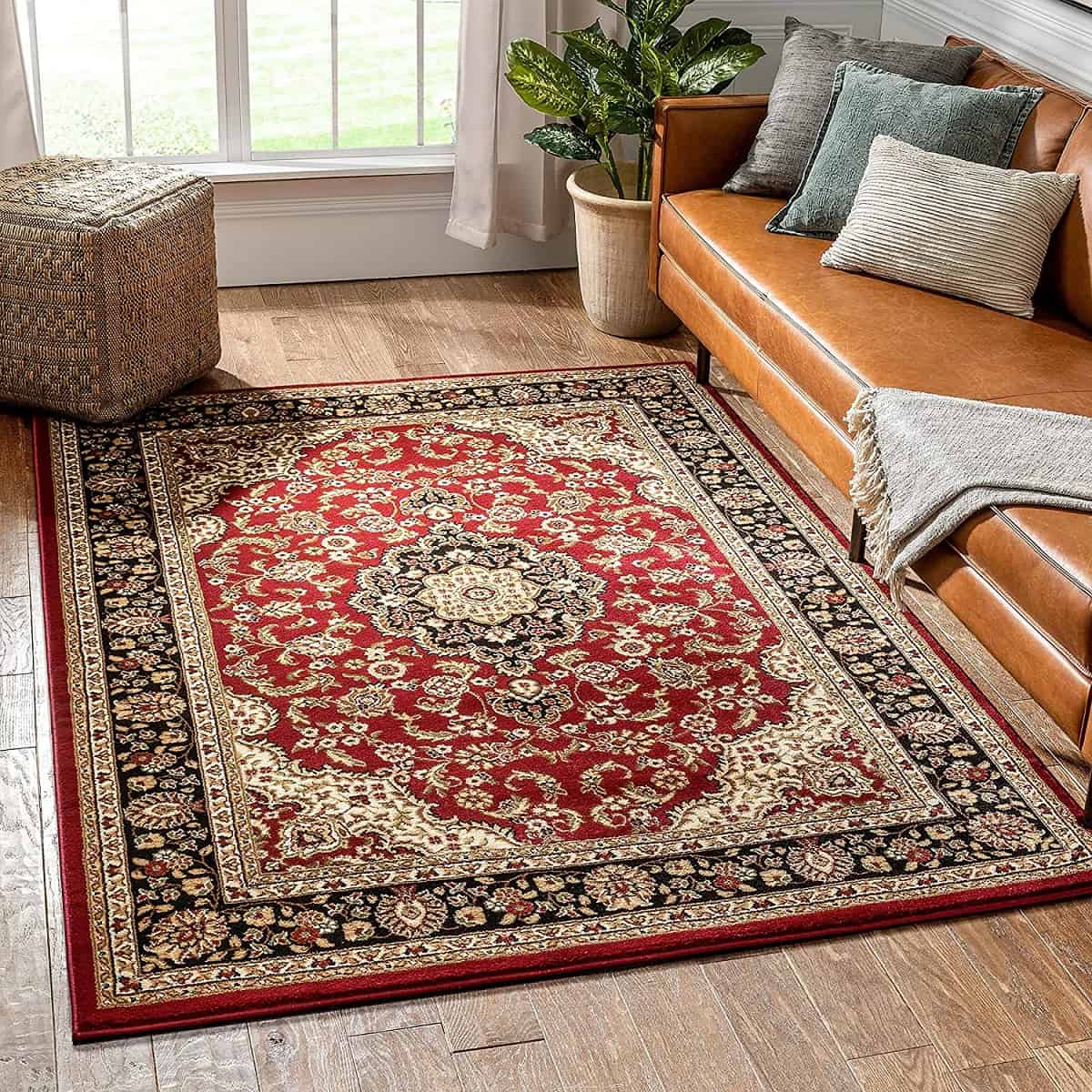 What Countries Are Associated With Oriental Rugs?

While oriental rugs are generally referred to as rugs that are made in Asia, there are only a few countries that make them.

Each region has its own distinct style of making these rugs, with some variations within each country, depending on the region.

Rugs from India are usually made with cotton, silk, and wool.

Rug weavers from Persia came to India and made one of the first Indian rugs, so there are some similarities in patterns and designs between Indian rugs and Persian rugs.

These rugs often feature nature-inspired patterns such as vines, leaves, and animals and use warm neutral colors mixed with red, green, and yellow shades. Some of the Indian rugs also come in pastel colors.

Egyptian rugs have two styles: the Mamluk and the Ottoman. Mamluk rugs were the first Egyptian rugs, but their influence became stronger when the Ottoman Turks conquered the country.

This is why Mamluk rugs are very rare, and Egyptian rugs nowadays come in the Ottoman style.

These rugs are known for their elegant designs that are often symmetrical. They feature patterns of plants and flowers, with designs of leaves and palmettos, with motifs of tulips, hyacinths, carnations, and pomegranates.

These rugs often come in soft neutral colors, with pops of faded reds and blues.

Rugs made in China often use wool yarn and cotton threads knotted to produce rugs with a high, soft pile.

Rugs from China have various designs, some with Taoist and Buddhist influences. These rugs often come in bold colors such as navy and bright red, yellow, and purple shades.

Nepali rugs are inspired by China and feature medallions and checkered patterns inspired by the Chinese culture. These rugs were initially made of wool from the highland sheep of Tibet.

Nowadays, they are made of wool exported from New Zealand or India and can be blended with cotton fibers.

They usually come in rich colors such as red, blue, yellow, green, grey, and brown.

Pakistani rugs are commonly made from wool and cotton fibers. While they are not among the finest oriental rugs, they are one of the cheapest but durable and of good quality.

These rugs often feature a medallion design at the center, surrounded by different patterns. They often come in darker and bolder colors, such as red and navy.

There are nine types of Pakistani rugs based on the tribes or regions that they came from, each with its own unique style and design.

Afghan rugs can usually be divided into two types: Turkman rugs and Baluchi rugs. They are usually made of wool, cotton, and silk and can vary from flat-weave rugs to plush, high pile rugs.

Afghan rugs have a unique motif as they usually contain imagery of war using designs of helicopters, weapons, and tanks.

It gives other people an artistic glimpse into a culture that has been largely affected by war.

Turkish rugs are commonly made of wool and are known for their often meaningful, sharp geometric designs.

These rugs have tribal motifs that contain a lot of symbolism, so they seem to tell a story.

They are normally made using a double-knot technique that differs from other oriental rugs.

Rugs from Iran are called Persian rugs, as Persia was the country’s former name. Persian rugs are considered one of the most superior rugs globally because of their high quality and extreme durability.

Persian rugs are often made of wool and can be blended with silk.

They come in so many colors, styles, and designs that vary depending on the region where they are made.

Where Did Oriental Rugs Originate?

However, the exact origin of the art and tradition of rug weaving is unknown. This is because all the archaeological evidence that is related to art-weaving is spread across a wide geographical region.

Given this fact, there is one thing that we can be certain of – that the making of oriental rugs dates back to more than 2,500 years ago, and the style and design of these rugs have remained consistent all throughout.

Each country has its own style of oriental rugs, featuring designs, patterns, and color palettes that make them easy to distinguish from other rugs.

All oriental rugs boast of high quality and very good durability that they are known to last for so many years. Oriental rugs can even be passed down from one generation to another with the right care and attention.

Iran – home of the Persian rugs, is considered the world’s most superior culture when it comes to rug making. Persian rugs are the most sought-after and in-demand oriental rugs out there, as it has been in the past years and centuries.

Persian rugs have a high knot count and are known to be one of the most durable and high-quality rugs.

Each Persian rug can be seen as a work of art that showcases expert craftsmanship and skill by the rug maker. The designs have so many variations because several regions in Iran have their own ways of rug making.

Because skilled artisans make these rugs with their own way of hand-knotting and dyeing to make various designs, each Persian rug is one-of-a-kind. Persian rugs are even considered valuable, so they can be so expensive compared to other oriental rugs.

Where Do Most Oriental Rugs Come From Today?

Most oriental rugs sold nowadays are from the Middle East and Central Asia.

While all countries that make oriental rugs claim that theirs are the best, they are pretty much the same in terms of quality and durability.

Out of all these countries, one of the biggest makers and exporters of rugs is Iran. Their rugs are sought-after and are always in demand. They have one of the best reputations when it comes to making rugs.

Also, a lot of the designs and patterns being used today, even on machine-made rugs, are inspired by traditional Persian rugs.

What Are The Most Popular Countries For Buying Oriental Rugs?

It is not uncommon for people to buy rugs when they are traveling overseas, especially when they go to a country that makes oriental rugs.

Here are the most popular countries where you can buy oriental rugs:

Iran started producing rugs as a form of necessity instead of trading.

They have been producing and selling rugs compared to other countries and are known as one of the world’s best makers and biggest exporters of oriental rugs.

Rugs from Iran have been in demand for years, although they can be quite expensive.

India is another one of the largest exporters of rugs in the world.

This country has been making rugs since the 16th century, and it is very common for tourists to buy rugs when they visit India.

This country started weaving rugs around the same time as India.

China is also a top producer and exporter of oriental rugs.

They started by making high-quality silk rugs, and their techniques have evolved over the years while still retaining their traditional designs.

Can Rugs Made Outside These Countries Be Considered Oriental Rugs?

Oriental rugs are strictly defined as rugs that are designed, made, and produced in “oriental” countries.

Though the term is outdated, the rugs are not. They are made for utilitarian and symbolic purposes, used as home decor pieces, or exported.

That being said, rugs made outside these countries are not considered oriental rugs. They do not use the same traditional techniques used for oriental rug making.

Many oriental-looking rugs made outside these countries are made using machines and use chemical dyes.

Rugs made outside oriental countries may be called oriental-inspired rugs when they mimic the design and patterns, but they will never be considered authentic oriental rugs.

Where Do Oriental Rugs Come From, And Which Country Makes The Best Rug?

11 Steps Of How Oriental Rugs Are Crafted

Where Do The Best Oriental Rugs Come From?